With the planet on the brink of no return environmentally, we urgently need to rethink how we live and embrace bold plans for our future cities.

As the global population passes 8 billion, and in a world of rising prices, sea levels and global warming, architects and urban planners find themselves on the front line in the battle to provide revolutionary solutions for a better and very different way of living. The problem is that the world cannot wait for tomorrow, the future is now… 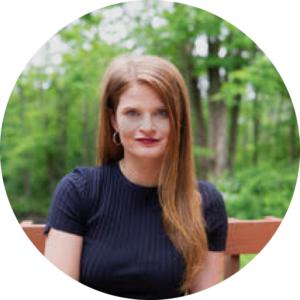 “If there was a floating city off the coast of Manhattan,” says Alana Goldweit, looking out of the window of her office on Main Street in Brooklyn, “I would be the first one to sign up.” But then the senior designer and associate at architecture studio Bjarke Ingels Group (BIG) would say that.

Alana was the project lead on Oceanix City, a new concept for sustainable island-based, offshore living for up to 10,000 people, developed in conjunction with the MIT (Massachusetts Institute of Technology) Center for Ocean Engineering and Oceanix in response to rising sea levels that are expected to affect 90% of the world’s coastal cities by 2050.

“It’s a tool in the arsenal of solutions for climate change,” she says. “It’s a floating city that’s built to rise and fall with water levels but it’s also a siteless design that could be implemented adjacent to any major coastal city. And the urban fabric of the design would be responsive to the culture that the floating platform and city is placed next to.”  In other words, it is a bolt-on environment for the 21st century. The location selected for the first prototype is Busan, in the southeast of South Korea.

The original idea was inspired by studying fishing villages in Vietnam, floating communities in the Netherlands and even bayside houses in Sausalito, California, but the architecture, history and culture of Busan is now being implemented into the design so that the first inhabitants experience no dramatic sense of dislocation – in fact, the idea is for them to consider the new development to be an extension of the existing city even though the way people live, work and play has been completely rethought. “The way people live, work and play has been completely rethought.”

Due to the shape of the platforms, residents will live on the waterfront and enjoy a seaview

Due to the hexagonal shape and soft, rounded edges of each platform, everybody will live on the waterfront, have access to the water and, with almost no exceptions, a great seaview. The buildings will necessarily be low-rise with the very tallest coming in at five stories to provide for balance and steady ground beneath the feet. “Seasickness will not be a problem,” laughs Alana. “At two hectares, each platform is almost the size of a cruise ship and we are inside the port, in sheltered water.”

The entire development will be mixed use in the same way as any city with residential, leisure, research and office space in close proximity, but will be designed so that people will work closer to where they live and be encouraged to walk and cycle – autonomous and electric cars will not be introduced until the development has grown much larger. Demand for places is expected to be heavy and selection of the first cohort has not been decided – although a lottery is one idea – but those that end up moving onto Oceanix Busan will have to be prepared to embrace a sustainable lifestyle in terms of water and energy use.

Residential properties will be studios or apartments with one, two or three bedrooms and will provide different price points, promote multi-generational living and the most diverse residents possible in terms of ethnicity and race and age. Retail will be a vital part of the mix, as will the involvement of local craftsmen and artists. “As designers and urban planners,” explains Alana, “We’re designing a framework that the residents are meant to fill in… there will be some baseline principles that will remain on every platform in terms of construction and kind of the bones of the buildings, but when it comes to the interiors and starting to express different personalities and experiences and vibes throughout the public space, that will be completely open. It’s going to be a real mix.”

What it will be like to live on Oceanix Busan

Buildings will all be low-rise, with the tallest at only five storeys

Close proximity of homes, office space and leisure facilities will encourage people to walk or cycle

And so, as envisaged a few years from now, the young professional will wake up in their two-bed apartment and take a shower – the water from the morning ablutions will go to a water treatment area and be turned into biogas as a form of reusable energy for the platform. A breakfast of kimchi toast made from vegetables grown in the greenhouses in the next district and sold by the old Korean grocer on the ground floor is followed by a five minute bike ride to the R&D department of the sustainability business that has been lured to Oceanix Busan from the mainland.

At lunchtime, there’s time for a swim before grabbing lunch at a local café among the brightly painted houses in the sculpture park modelled on Gamcheon Culture Village (or “Korea’s Santorini” as it is also known). After work, there is a choice of activities, but having been out to a concert the previous night by a BTS K-pop tribute band, and with a soccer match the following morning, they opt to stay in and decorate the flat. The interior design inspiration is modern Korean and influenced by the public art – benches and litter bins designed by local artists are to be found on every street – with the immediate aim to create a calming space in which to enjoy traditional-style Korean wall hangings made from recycled textiles.

“We’re designing a framework that the residents are meant to fill in… to express different personalities and experiences and vibes.”

After a takeaway of bibimbap and popcorn chicken, and just before bed, they will divide the rubbish into waste and recycling and despatch it down the relevant chute for it to be compacted and turned into energy or repurposed. In the next apartment a young family has just put their young child to sleep, lulled by the sound of the sea, and the parents are settling down to stream a new Lee Min-Ho series.

Downstairs, the old grocer locks up his shop and walks two minutes to his ground floor apartment and takes out his fishing rod and a bottle of Scotch Blue whisky for a relaxing hour before he also turns in.

According to Alana, the “wheels are turning” on building the first prototype off Busan. The aim is to start with three platforms of six hectares and monitor the wellbeing and happiness of the residents, learning on the way and harvesting data and feedback to improve the experience to, potentially, a much bigger 75 hectare site. The idea is infinitely scalable due to the shape of the platforms and can be repeated in almost any coastal location in the world. Maybe even off Manhattan.

The platforms will become extensions of already existing cities

Other innovative cities changing our future 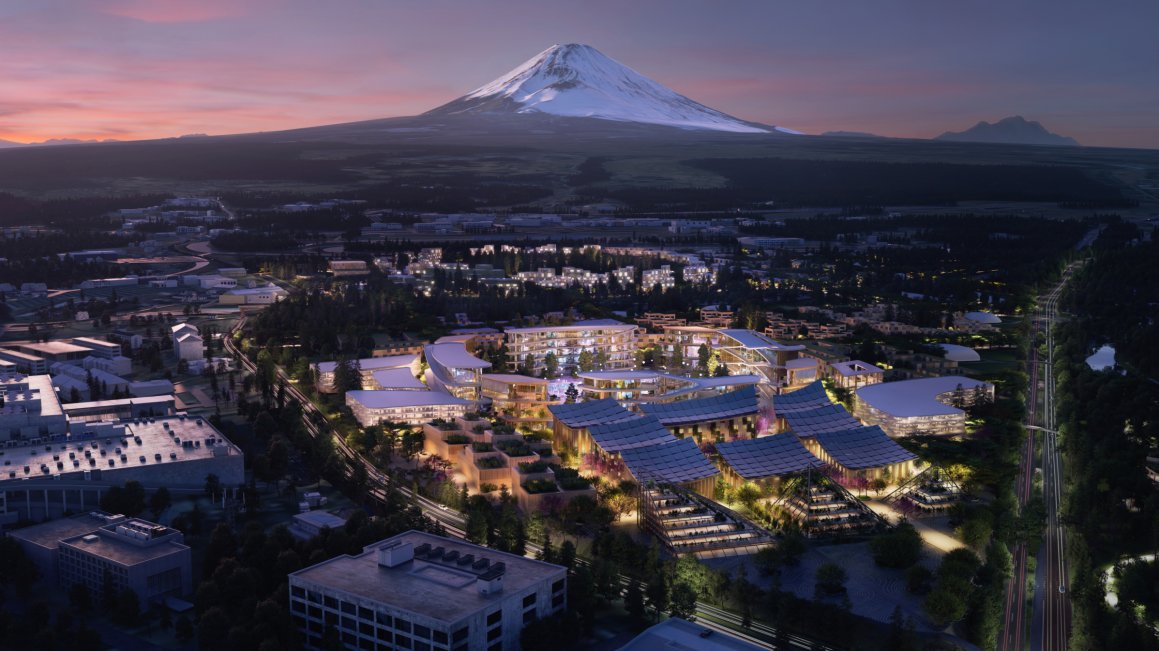 Woven City will sit at the foot of Mount Fuji

As locations for prototype cities go, one benefiting from the crisp mountain air at the foot of Mount Fuji is pretty hard to beat. With construction well underway on the site of a former car factory, Woven City is also being developed by Danish architecture studio BIG to be a 70 hectare home for 2,000 Toyota employees, their families, scientists and retirees who will test living in smart homes: robotics in a “real world environment.”

More than just a living laboratory, however, it will also be a fully-functioning city built from the ground up with the key elements of the modern urban experience stripped back, reimagined and woven back together – hence the name.

Everything is human-centred and integrated with a focus on wellbeing. Powered by hydrogen fuel-cell technology, the buildings are designed to “take care of basic needs and enhance daily life”, to the extent that sensors connected to AI will check the health of residents and even suggest what food to eat to improve both wellbeing and happiness, and prompt when exercise or fresh air is necessary. Groceries will be ordered automatically and menial jobs such as cleaning will be looked after by in-home robots, freeing up time for the residents and helping to remove stress.

And, in an environment where social media and online retail is replacing physical meeting places, the traditional-looking timber homes are arranged in groups around central courtyards. Green spaces between the streets let the city breathe and encourage socialising.

A network of streets cater for three different speeds – a main road for self-driving vehicles; smaller streets for other modes of personal transport like bicycles and scooters; and then a pedestrianised lane. Meanwhile, goods travel beneath the city in bespoke pathways on autonomous palettes that also take away outgoing packages and collect the rubbish.

“Woven City can serve both as a prototype for future cities and as a retrofit to current cities,”  says BIG founder Bjarke Ingels.”By simply ‘reprogramming’ existing streets, we can begin to reset the balance between people, mobility, and nature in cities as diverse as Tokyo or New York, Copenhagen or Barcelona.” The future is already here. 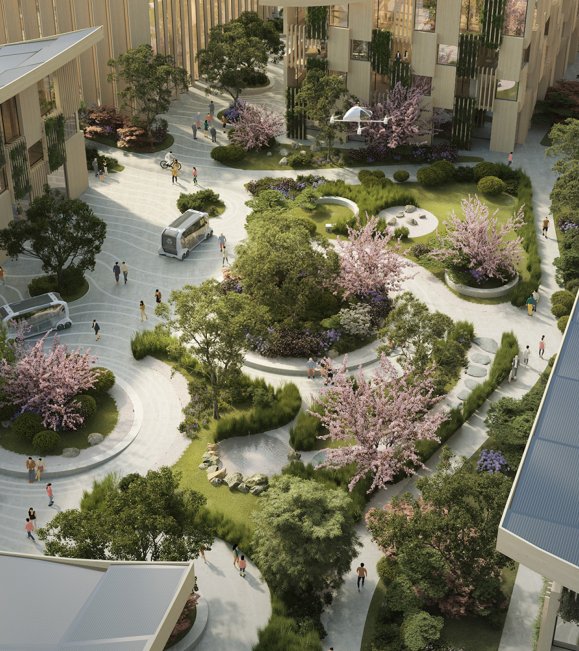 Green spaces between the streets let the city breathe 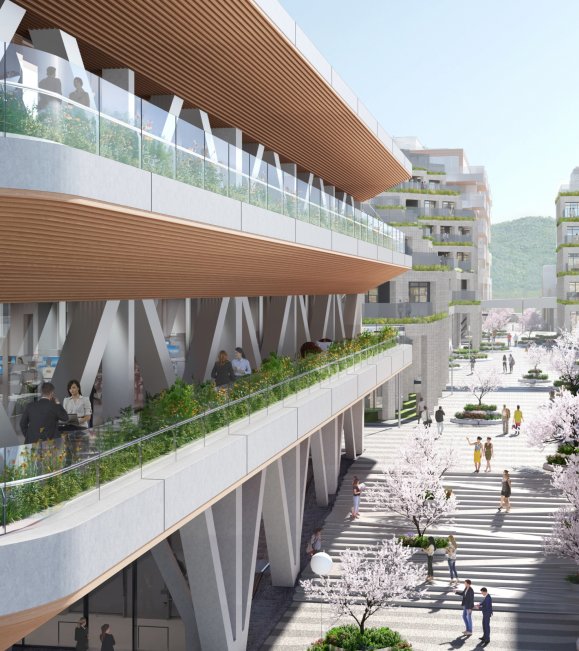 Menial tasks such as cleaning will be done by robots, to free up time for the residents 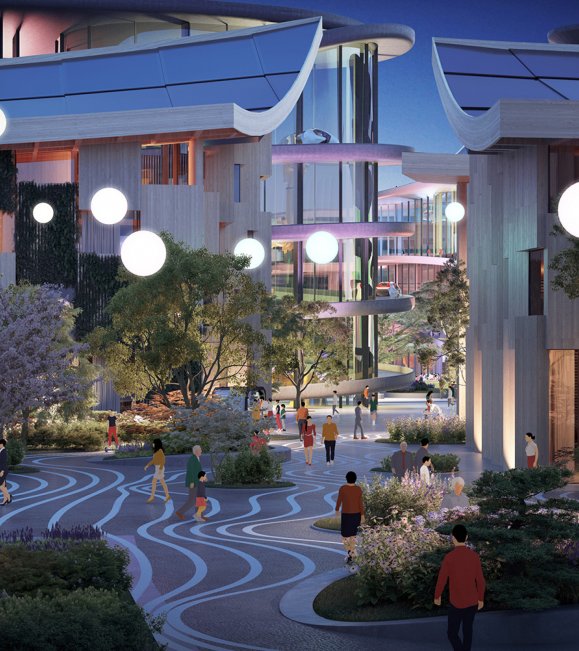 Traditional timber homes will be arranged around courtyards to encourage socialising 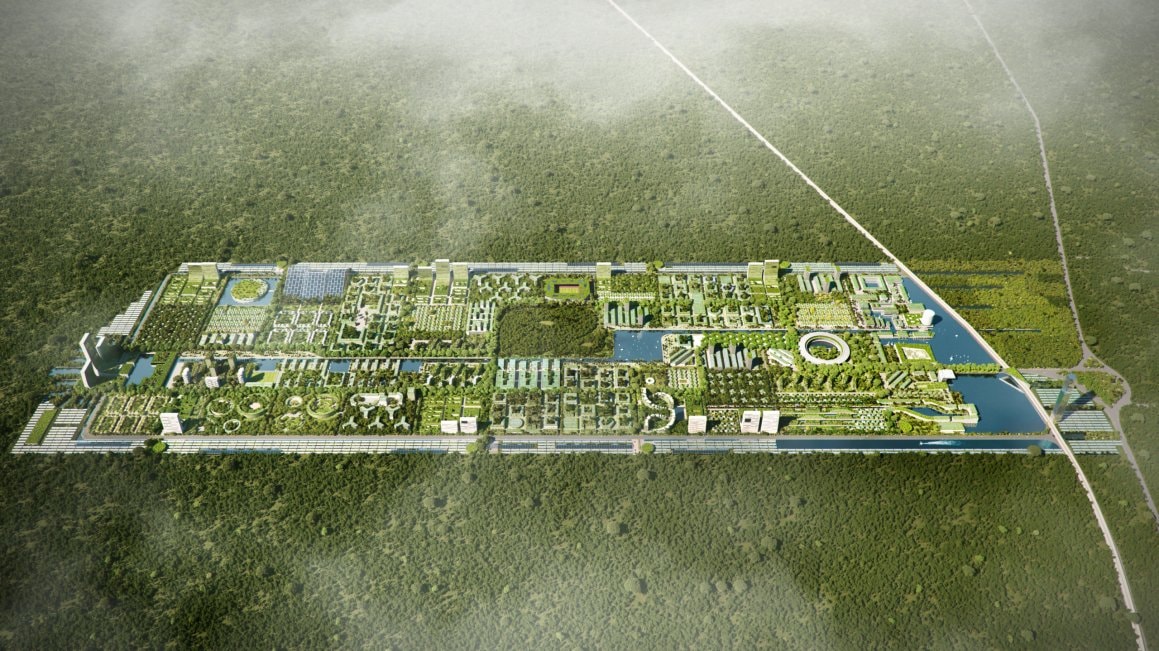 In the Smart Forest City, the intention is to create an urban ecosystem in which nature and city intertwine

Following the success of his award-winning Bosco Verticale, Milan’s high-rise residential development covered in trees, and an impressive track record in China, architect and urban planner Stefano Boeri has announced the prototype development of a new ‘Forest City’ in Mexico with space for up to 130,000 inhabitants.

On a site originally intended to be developed into a shopping mall, over 60% of the area will be used to grow 7.5million plants from 350 different species which will help absorb 116,000 tons of CO2 per year and, Boeri hopes, turn the development into “an urban ecosystem in which nature and the city intertwine and act as a single organism.”

The residents of the Forest City will tend the plants. Sensors and data collection – with strict precautions for privacy – aims, among other things, to help prevent the spread of disease and monitor energy flow so washing machines and dishwashers can be used at the most efficient time for everybody inside Cancun Smart Forest City.

In a nod to a simpler life, the population will have every service within walking or cycling distance and benefit from 100% food and energy efficiency in what is designed to be a circular, self-sufficient economy. The area will be laid out like a campus with five different entertainment areas.

The power of the sun will be captured to provide energy, while proximity to the Caribbean Sea will be used to supply, via desalination plants, the water necessary to maintain the plant life as well as help with food production. It will also mean that paddling along the network of canals is as viable a transportation option as the green and clean internal electric and semi-automatic mobility system. Cars will be notable by their complete absence. 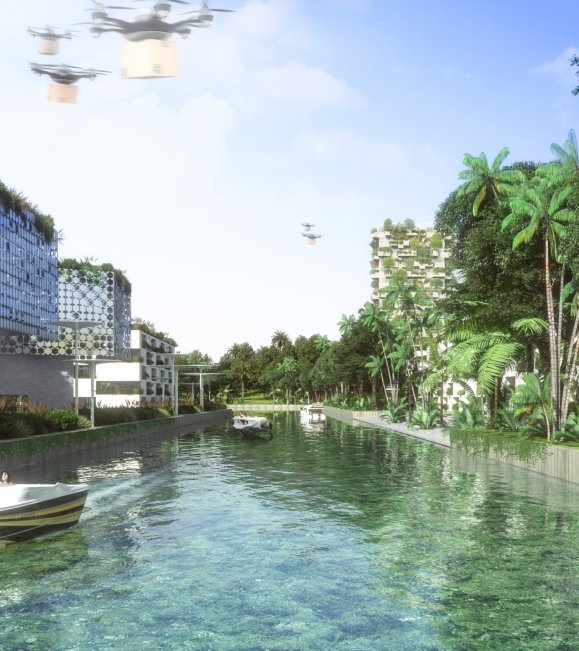 With no cars, the waterways will be a green and peaceful way to travel 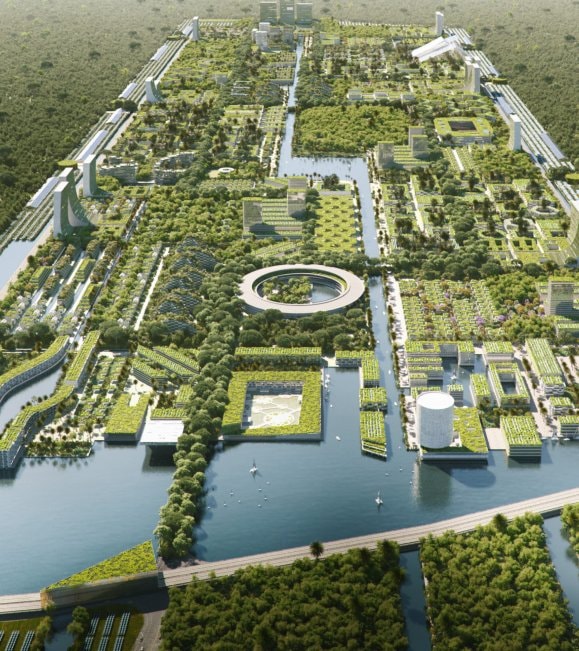 Over 60% of the area will be used to grow 7.5 million plants